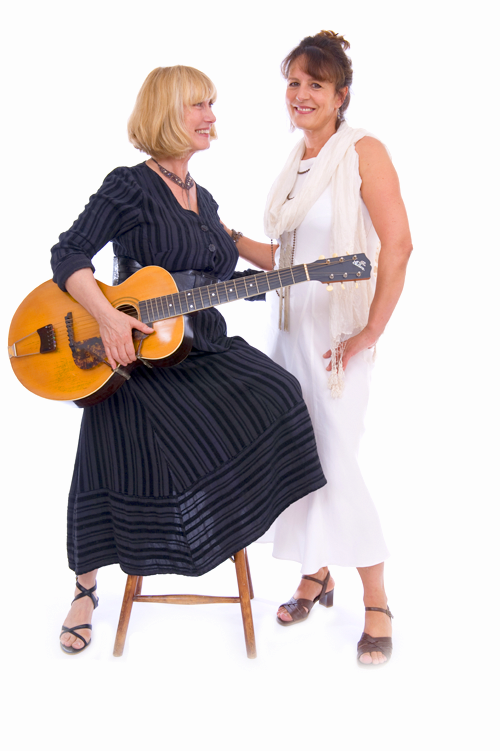 Hilary James and Janet Giraudo were born in Stoke-on-Trent, the family later moving to Worcestershire. Hilary remembers: “ours wasn’t a musical family but I sang all the time… in the bath… at school… in the park… in the street. Janet and I only started to sing together in the year or so before she disappeared to France. I taught her a few songs but then she was gone”.

At twenty, Janet had decided to blow a small inheritance and hitched a lift south in search of sunshine and a new life. She found both in France, forsaking Evesham’s apple orchards for the vineyards and olive groves of Provence – and who could blame her! Nowadays she even dreams in French and laughs at herself when she can’t remember an English word, but the French experience adds a major dimension to The Two Sisters’ repertoire.

Back in England, Hilary James was already establishing her career as a singer. Many albums and concerts later she continues to appear regularly with long time partner Simon Mayor and as singer and mandobass player with Britain’s first modern mandolin quartet The Mandolinquents.

No musical style was off limits for Songs & Chansons. Hilary’s early interest in English folk music and memories of hearing Robin & Barry Dransfield and Tim Hart & Maddy Prior gave rise to My Faithful Johnny and I Live Not Where I Love. Three songs – L’Auberge Au Crepuscule (The Inn At Twilight), Tout S’Efface (Everything disappears) and Plaisir d’Amour (The Joy of Love) – stem from the repertoire of Rina Ketty, a classic French chanteuse of the pre-war era (although Italian by birth). Hilary had sung a cameo of Un Flambeau, Jeanette, Isabelle (Bring a torch, Jeanette, Isabelle) on one of Simon Mayor’s early mandolin albums and suggested this version of the lovely French carol. Janet knew Vivaldi’s Gloria from choral singing in France and suggested the duet Laudamus Te; it’s heard here in a special mandolin quartet arrangement by Simon Mayor. Simon also composed two settings of English poems especially for the album: Christina Rosetti’s simple and beautiful Lullaby, and John Masefield’s evocative Sea Fever.

‘One of the most stirring female voices in contemporary British folk music’
Craig Harris, All Music Guide

Hilary James has achieved one of those rare things, a successful career in music spanning over thirty years. She was one of the first musicians to set up her own label back in 1979, which has since released a total of twenty five albums, including five of her own highly acclaimed solo CDs and a catalogue of best selling CDs, music books and videos by long-time partner, mandolin virtuoso and multi-instrumentalist, Simon Mayor.

Possessed of ‘one of Britain’s finest voices’ (BBC Radio 4) she is also a fine songwriter and instrumentalist. Self-taught on double bass and guitar, she rarely appears these days without her trademark bass mandolin. She also nurtures a keen interest in music for children and presented music education programmes for BBC Schools Radio for six years. She was one of the last presenters of the iconic BBC Children’s Television programme Play School and together with Simon Mayor recorded six CDs for children. She has illustrated and co-written two picture books for Top That! Publishing PLC and The Musical Mystery Tour children’s song book, which was originally published by Faber Music.

A lively wit (and at times side-splitting humour) has been a signature part of all the Mayor/James collaborations. Together they have founded several bands including most recently the Mandolinquents, (Britain’s first modern mandolin quartet), Slim Panatella and the Mellow Virginians, and, going right back to their first student days, Spredthick, with fellow student Andrew Mathewson. This trio gained early national acclaim with headlines in the Melody Maker, an appearance on the main stage at the Cambridge Festival and first place in a national music competition with Hilary taking the award for ‘most outstanding artist’.

While the majority of Hilary’s recent repertoire is comprised of traditional English, Irish and Scottish ballads, she is equally at home singing Irving Berlin, country blues, Vivaldi or Bizet. She first attracted attention during the four years that she studied Fine Art at Reading University. In addition to running the student folk club she sang with the University Big Band and occasionally disappeared to the music department to practice a bit of Handel. After university she took a postgraduate course in education and became concerned about the lack of quality children’s music in England. Together with Mayor, she formed The Musical Mystery Tour children’s show visiting theatres, arts centres and schools with a specially written show.

In 2008 she discovered her old student home, St Andrews Hall had undergone major renovations and reopened as The Museum of English Rural Life (MERL). Seeing this as the perfect setting for traditional music she proposed a series of spring concerts. “Songs, Stories and Traditions” begins it’s fifth season in July 2013 and was the catalyst for Hilary’s latest CD, English Sketches.

Janet Giraudo was born in Stoke-on-Trent, England but moved to a small village in the South of France at the age of twenty where she has now lived for over thirty years, raising two sons, teaching English, becoming a fitness instructor and helping out in the Giraudo family vineyards and olive groves.

More recently she developed an interest in painting and singing.

Janet writes:
“I recognise that in my family art and music have played important roles, first in my mother’s life and subsequently in my sister’s career. My mother dreamed of going to Art College but, coming from a large family supported by a widowed mother facing the financial restraints of wartime, at the age of fourteen her artistic talents were put to use painting ceramics by hand in the local pottery factory. My sister, Hilary James, fulfilled my mother’s dream by studying Fine Art at University and is now an accomplished artist and illustrator. She has also enjoyed a very successful musical career.

I suppose over the years I’ve always felt that I, too, had an underlying interest in the arts but it wasn’t until 2006 that I really started to develop my passion for painting and singing. With Hilary’s encouragement and my growing family as inspiration I began portrait painting, joined a choir and more recently started singing with Hilary. We’ve now finished the recording of our debut album!”

In Janet’s own eclectic website you can browse through a selection of her paintings, read more about The Two Sisters’ album. and there is even a section on olive oil! The Giraudo family now produces and sells some of the best quality organically produced olive oil in the South of France.