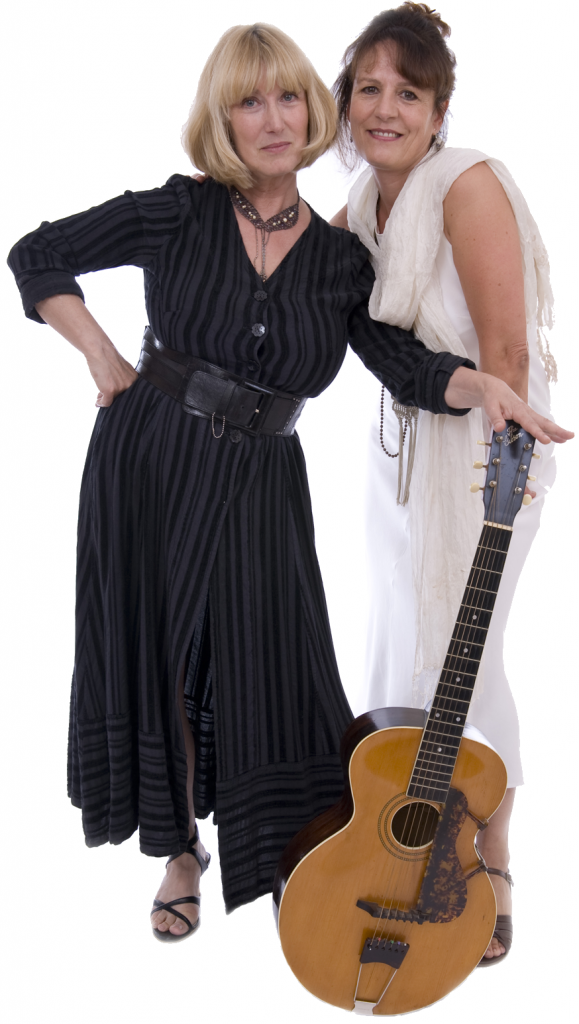 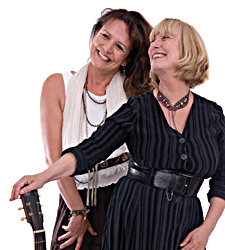 Hilary James and Janet Giraudo were born in Stoke-on-Trent, the family later moving to Worcestershire. Hilary remembers: “ours wasn’t a musical family but I sang all the time… in the bath… at school… in the park… in the street. Janet and I only started to sing together in the year or so before she disappeared to France. I taught her a few songs but then she was gone”.

At twenty, Janet had decided to blow a small inheritance and hitched a lift south in search of sunshine and a new life. She found both in France, forsaking Evesham’s apple orchards for the vineyards and olive groves of Provence – and who could blame her! Nowadays she even dreams in French and laughs at herself when she can’t remember an English word, but the French experience adds a major dimension to The Two Sisters’ repertoire.

Back in England, Hilary James was already establishing her career as a singer. Many albums and concerts later she continues to appear regularly with long time partner Simon Mayor and as singer and mandobass player with Britain’s first modern mandolin quartet The Mandolinquents.

No musical style was off limits for Songs & Chansons. Hilary’s early interest in English folk music and memories of hearing Robin & Barry Dransfield and Tim Hart & Maddy Prior gave rise to My Faithful Johnny and I Live Not Where I Love. Three songs – L’Auberge Au Crepuscule (The Inn At Twilight), Tout S’Efface (Everything disappears) and Plaisir d’Amour (The Joy of Love) – stem from the repertoire of Rina Ketty, a classic French chanteuse of the pre-war era (although Italian by birth). Hilary had sung a cameo of Un Flambeau, Jeanette, Isabelle (Bring a torch, Jeanette, Isabelle) on one of Simon Mayor’s early mandolin albums and suggested this version of the lovely French carol. Janet knew Vivaldi’s Gloria from choral singing in France and suggested the duet Laudamus Te; it’s heard here in a special mandolin quartet arrangement by Simon Mayor. Simon also composed two settings of English poems especially for the album: Christina Rosetti’s simple and beautiful Lullaby, and John Masefield’s evocative Sea Fever.